Are Most Cops Really Good Cops? 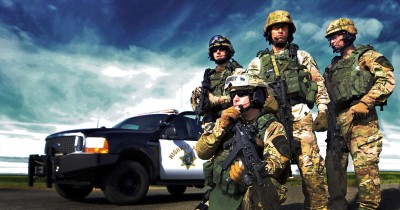 You’re not a good cop because you don’t exterminate people. You’re a bad one if you don’t stand up to those who do. Right?

We see lots of bad stories about police. But those are isolated incidents right? Well let’s ask tough questions today and get REAL answers. I hope every one of you to answers for yourself.

First question! Do we have a nation where police murder citizens and are set free, while those that feed the homeless are arrested? Of course this would NOT make all police murderers. Liberty is just and equal and WE MUST judge individual actions.

To even suggest America’s cops are bad, brings with it labels like cop hater, anti-authority, or an anarchist. That’s a remarkably consistent response from the masses. Almost as if it has been downloaded into our brains while our police grew more militant and militarized.

There’s also a clever tactic being used by media and government. Talk about the RACE related brutality that will divide people. One side gets focused on color, the other calls those who mistrust government and police, rioters. All while the larger issue of abusive government gets ignored. Again!

Now I’m not here to bash police. You’ll find me first in line to stand with officers that truly keep their oath and applauding those who behave respectably. So while I’m going to use officers today, this test works on all public officials.

America overcompensates when it comes to officers. As if because there are so many negative stories, we have to make amends by saying police are all hero’s. This is nonsense. You are NOT a hero because you wear a uniform. You are a hero by actions alone. I tire of society bullying us into patting others on the back BECAUSE of their job. It’s foolish propaganda. Did you know that being a police officer is not even in top 10 for most dangerous jobs?

In politics there are two factions. Liberty and tyranny. They are also called good and evil. In the end it’s that simple. Within are groups of people supporting various elements, often not even realizing there are just two sides. But lets ask more questions.

Let’s imagine you visit a food chain and the fries are BURNED nearly every time. The fry cooks have not poisoned you, but would it be safe to say that most of the fry cooks are BAD?

Now unlike fries, we tend to leave the “grey areas” alone in politics and only call officials BAD that are openly committing crimes. Even then society lets them get away with things regular people would not. It seems we have lowered the standard both in government and ourselves. Yes, not only our public servants; but we the people are tasked with being sententials of liberty. Yet are not our government employes sworn and paid to protect and defend liberty?

Ask yourself. If tyranny becomes common, is it safe to say that it’s defenders are doing a poor job?

At the center of the debate is law enforcement. But the debate is not entirely about police, it’s about the two factions in all levels of government. The behavior of law enforcement simply reveals a great deal about whether tyranny or liberty is winning in our constant struggle for freedom.

Americans are being bullied to affirm that most police are good! Without facts! To say that there’s only a few bad officers and that’s what we hear about on the news. — True enough, most police are not murderers. But lets define good cop and bad cop. For now let’s call the abusers “really bad cops”.

When I speak to folks who were officers 30 years ago, they grimace, telling me something has changed. When I question “modern” officers they often say “I just enforce the law”. So I ask about their their oath and what they do when so called “law”, violates the supreme law. They often get uncomfortable and go into repeat mode. “I have to enforce law.” This is code for “my job comes before my oath”. THIS is by definition a BAD cop. Try asking some tough questions next time you get the chance.

Americans are looking for a reason to applaud police. Myself included. We want our children to be safe and we’re looking for hope that liberty is not lost. Now most officers don’t kill 12 year old boys over toy guns, or shoot people in the back. We can safely call those the “really bad cops”. That said, it’s also true that police have a growing reputation for harassing, collecting and bullying. Often they do these things with a polite smile. But that’s no better than a grinning sheriff of Nottingham is it?

Next many officers seem just their head down and try to avoid problems. They know it’s bad, but they’re not sure what to do and they know that when officers stand up to corruption, they tend to get in trouble. — But we don’t pay officers to avoid problems. We pay them to STOP problems. What if our fry cook did not even cook fries. Would he be a good fry cook?

Government employees are the fry cooks. They have been hired to serve us. Say a guard is hired to protect you yet allows you to be killed, not because he supports your murder, but because he is afraid to stop it. Is he good at his job?

An officer then who has sworn to protect and uphold our Constitutions and liberty, hired to do so, does not have to abuse us to be a bad employee. He or she only has to be silent or not defend against those that violate us. The patch you wear is irreverent to liberty. Any officer that who allows lawlessness, whether from a brother, another agency, the Federal government, or a common thug; is by definition a BAD cop. If you can’t stand up to the lawless, you have no business swearing you will!

To be a good cop you MUST PASS ALL 3 of these tests.

This is a simple but hard test. But we must conclude that an officer that does not stop fellow officers for doing what is lawless, he is by extension NOT doing his job. Hero’s are the officers that stand up to evil and corruption no matter the cost. That uphold all three of the above, regardless of the the peril and the thin blue line. To those, I salute you!

Say an officer who arrests someone for having an “illegal gun”. He or she is by definition a bad cop, since the 2nd amendment he swore to uphold says there is no such thing as an unlawful gun. If that officer says the courts or other laws told him otherwise, it’s no different than him being bribed by a crime boss. The rights he vowed to defend are not defined by judges or legislators. The people gave that command and it’s not open to debate. Unconstitutional legislation is not law.

Some of nicest of officers have opted to obey lawless legislation (that which violates superior law, ie our constitutions) for a paycheck. That is lawless in itself. But an officer that even tolerates a fellow officer violating their oath, has failed. They are by definition NOT doing their job! Lets face it, power corrupts and principle is hard to come by. But a government employee who does not do the job they are hired to do, is NOT a good employee, representative, mayor, congressman etc. They are BAD at their job because they are not doing it!

You’re not a good cop because you don’t violate my rights. You’re a bad cop if you don’t protect them with your life! That’s the only measure that counts and if you can’t handle that, I don’t hate you. You just need to find a new job.

Stop making excuses for public servants. It’s not about hating cops or race. People who judge a group only because of the uniform they wear, are as foolish as those that judge people by the color of their skin. We must judge individually on principle and fact. Not as a mob, but giving to all due process and justice.

If we start being accountable and stop being afraid to speak truth, we all grow. Truth brings liberty and with that we can unite on principle, demand justice and encourage others to be bold, including our officers. Weeding out the bad we can replace them with courageous, principled warriors for liberty who will truly make our streets safer.