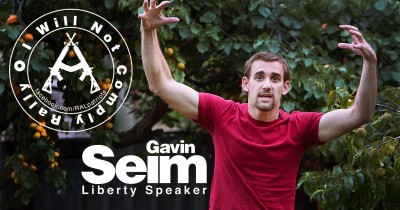 What’s happening here is the patriots are finally upholding the law. We are keeping the peace because our government has failed to do so.

A monster of an unconstitutional anti-gun bill just passed in Washington State due to millions in out of State spending. It’s called i594 and makes it a “felony” to so much as loan a gun to a friend. Except it’s not really law and we are going to defy it, starting with this rally. Here’s why in simple terms.

Some say we must follow i594 because it was voted in by the people. The people after all have spoken! In truth this was addressed by the founders themselves when debating the Constitution. They were the highest law, overriding all others. Any legislation that violated that was NOT law at all, it was automatically null and void. See Federalist #78 and many other founding documents.

Yes there were courts and lawyers meant to judge such things, just like today. But the judges never had authority to define the rights or rule them. Only to uphold them 100%. If a judge did not behave, they were to be removed. The framers were clear. A law that was unconstitutional was VOID the moment it was written. The people had the duty to defy such lawlessness and that’s why history is being made here in Washington. Because we’re finally stepping up.

More still, the framers dealt with the issue of people being deceived into voting away their rights, as we have seen with i594. The Constitution’s being much harder to change, would take more time and planning to modify. This helped secure a defense against rash uninformed actions like we see today. Petty legislation like i594 remains lawless.

Not only would the State Constitution have to be changed, but the US Constitution as well, since both have supreme authority over State legislation. Even then gun rights would not go away, because in the case of rights, the Constitution does not give them to us, they are natural, God given. They are assumed in the text, not granted.

In fact no law can give or take them away. EVER.  The people simply have to be willing to refuse lawlessness. That’s what’s happening in WA State. The peoples vote on 594 is 100% irrelevant because it is NOT law, nor can it ever be law because it violates an absolute right. We are not a Democracy. You do not have the right to collectively vote away the life or liberty of your neighbor.

Some of my Christian brothers quaver at this. They say “Gavin you need to follow the law”. I tell them them; “it’s time to stop cowering and find courage. I am following the law by disobeying lawlessness. I am preventing a crime and protecting my family as is by our duty.” — We need to understand that law is not defined by the whims of the collective or the government. It’s foundations are firmly laid out to protect life, liberty and property. Anything contrary to that is not law, (see Frédéric Bastiat and John Locke for further reading).

So in any that support i594 are supporting criminal activity in every sense. Those that remain silent are complicit in a crime. Finally any official that enforces 594 is a criminal, violating their oath, 2 Constitutions and a plethora of other State and federal laws such as 18USC 242. This will not be tolerated.

At this rally we’re not simply coming together to voice our displeasure. We’re coming to DEMAND the law be followed and our rights upheld. We are coming to openly violate lawless legislation. — Tyrants beware. We are done cowering. We are peacekeepers and we WILL enforce the law. You are not taking away our birthright and you dare not try.