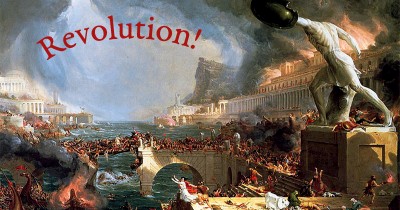 I say what everyone is avoiding. REVOLUTION!

I’m not hear to sell anger. I’m here to talk about peace and principle. Folks are sometimes put off by my direct approach. But when the patient is hemorrhaging, you don’t sell them a band aid. Our liberty has been wheedled away by false politeness and false shame laid upon those standing for it.

We have made a terrible mistake. We have taught ourselves to believe that enemies are without. That we cannot not respond to those within as we would a murderous assailant.

We have the God given right to revolution. Why? Because we have a right to defend life. With it we have an obligation to prudence and principle and peace. Honorable revolt is simply a defense from the lawless. Don’t take my word for it. This happens to be a key part of the philosophy on which America was built.

We must STOP hiding. We must STOP being afraid of what propaganda and labels the enemy are using. Do you care what names the thief calls you? No! We don not need their approval to demand our liberty with principle and resolve.

When government violates the peoples rights they are the worst enemy of all. They have  declared WAR on the people under color of law, despite an oath of obedience to those same people. To defend against them is the duty of a man to his brother. Our response should be firm and immediate.

Any agent of government who attempts to take away liberty and our means to defend it; should be treated in every respect as the rapist or murderer at our doorstep.

Stand principled, don’t throw the first punch, or fire that first shot. But if we mean to have liberty, we cannot cower before the invading force. No matter what patch they wear, or what oath they swear. We have right and duty to use necessary force against a lawless agency who has declared war on us. But we always stand peacefully, so long as peace is at all possible.

Revolution is associated with mad men. It’s true that we should never love violence and never shed innocent blood. But we must stop negotiating with terrorists, giving them bits of our liberty in trade for false peace. This empowers these bureaucratic terrorists that attack us. By affirming our rights and our resolve, we better understand liberty and remind them we will NEVER relinquish it. We must instill fear into the hearts of these terrorists that assault us.

I seek no violence. But make no mistake. War has been declared on liberty. We Stand now to avoid the spilling of blood, because if we do not, it will flow in rivers through our streets. We must not seek the sword. But we must defend justice. Appeal to heaven.

Rescue the weak and needy; Deliver them out of the hand of the wicked. — Psalm 82:4.

So to those who find me offensive. Look past my imperfections. To those who find me rude, my lack of subtlety is because we lack time. To those who oppose this liberty, your evil deserves no merit. — Oh how I wish for peace and tranquility. But I will not pretend we have it of we do not and I seek to stop the hemorrhaging.

We start with a revolution of hearts. With that must come a resolve to do what we must to preserve liberty.

On December 13th we fire a metaphorical shot across the bow on an invading force. If they continue to attack rather than retreat, we have a moral obligation defend liberty preservation of peace and the safety of our families. Love your neighbor, by speaking truth and defending their liberty!

You want a reason to defend our rights? You can’t trust any governmental body in the State of Washington or any other State. All judges, all attorneys have no oath of office. This means they are all a corporation, not a body to deliver true justice. The Constitution is not even considered.
With people having this power, do you think we stand a chance of receiving fair treatment?
If we don’t stand up for our rights, true liberty will be gone FOREVER.

You are absolutely right. What most people don’t know is the court is already confiscating weapons (ie Grant County). Gavin has come very close to finding out that even the police can enter a anti harassment order which requires the turn in of weapons. You will go in front of a judge (no jury, no trial, no real evidence required). They call it preponderance of evidence. I call it preponderance or tyranny. This NFL domestic violence advertising for woman is also working quite well. They even have the New Hope office in the court house to help woman fill out the forms so it will go through without a hitch. Of course, we as men, are not supposed to question the domestic violence system. Also if a man breaks the order (which is the trap of the game) you lose your guns for life (gross misdemeanor)….Ingenious gun confiscation method….

I totally agree that we have to exhaust every means of accomplishing a peaceful return to the constitution. I think common sense tells us the government has long been preparing for the people to begin waking up. It’s my opinion that this government anti-liberty agenda, like a train heading down the tracks, already knows who or what will be on the tracks and has created Homeland Security (not for some imaginary terrorists) but for us. I also think the public has no idea what else is being quietly implemented. To loosely quote the matrix, if you want to know how deep the rabbit hole goes google “Insitu wins potentially lucrative contract from Special Ops Command.” or “Navy Proposes Electronic Warfare Training Near Oroville, Wash.” and go from there. Forget about stingrays and mysterious cell phone towers.. Like any technology, it can be used for good or bad. I guess we are on the road to finding out which….