WE the People Are the Problem – NOT the Foundation 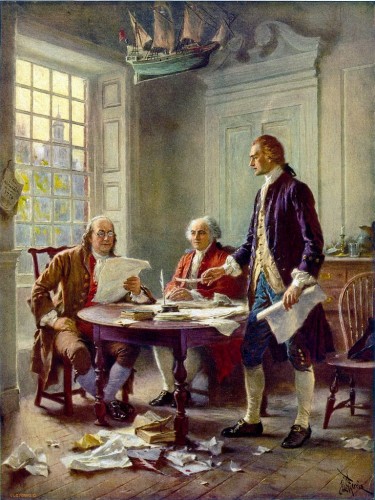 Recently I Was a guest on Free Talk Live (start at 48:00). We had a interesting talk about checkpoints, the Constitution and freedom. The folks over there are mostly Libertarian Voluntaryists and we had an interesting talk that got me thinking. I agree with them on many things. But not all.

It seems there is a group that is pro-liberty, but reject the Constitution because they think it’s just another form government power looking to oppress them. They say they are not anarchists, they want a self-governance where the government is followed by choice, not by law.

It’s a little confusing, probably because they never explain how this could possibly be implemented on any scale I have no problem with the idea of private fire departments, or water supplies. That’s free market and that’s good. But if any one person can at any time refuse the law of order that has been agreed upon than there is no order

I think they really are looking for in large part is what the framers already gave us. America is a essentially nation of self government. It does not look like that these days, but that is our foundation. WE THE PEOPLE have allowed our government to abuse us because it was easy and it looked safe. But it is E who have the power to change our government.

We don’t have a foundation problem ladies and gentlemen. We have a sin problem – Lets say it like it is. We are lazy, self serving people who don’t want to do what’s right. Our nation is rejecting our foundation based on Godliness and moral values and no nation can thrive without those values.

Men are imperfect, they tend to go with what is easy and fun unless tempered by moral and just truths. But I submit that we cannot fix this by simply pretending morals truths don’t exist. No, you can’t always do whatever you want. It doesn’t work. We have to have some order and it must be tempered by restraint.

The argument says that “the Constitution allows tyranny and has been powerless to prevent it” – Let me say that the Constitution is a document of law that We the People placed upon government. It has protected us from many things and where it has failed WE have failed. There will always be government for anarchy cannot exist over time. The American Foundation, backed by the Constitution, backed by solid Biblical morals is solid – It’s a system whereby the people have God right. Why? because rights are God given and cannot be revoked. Further, we have placed laws upon government that can only be altered by the agreement of WE the people. That is good.

Some will say, look “we had slavery as our foundation” Wrong, we had slavery, but it was not our foundation. Slavery has always been a blatant violation of the our foundation. Some of the framers knew that but did not know what to do about it. Others ignored it as it was engrained in society – But our lack or justice cost us a great deal of blood – There are consequences for evil and we paid dearly for that sin, just as we will pay dearly for the evil of abortion – There is always a cost for evil.

What of here and now?

We have a foundation. Some say we should throw it out and start a new one. Yet we can already choose our own government! We already have the right to change it. WE are too lazy as a society to take a stand, so we have let our government abuse us for false promises of security in trade for our liberty. For freebies – WE hand it over to them.

There will always be a government. If we had a clean slate today and removed every leader, that very action would bring new leaders. Laws would be made, documents would be written. Governments are always instituted among men. It’s how God arranged the world. Small government is a good idea, but nothing man can to will every make everything voluntary.

We talk about law. All law is not bad. Unjust law is bad – In that it’s important that we consider what law really is. We must consider what is law and what is lawless. I feel William Blackstone summarized quite well who defines law.

So who decides what harms others. Morals do, values go, people do, government follows. What defines values. God does, he always has. This cannot be avoided. Godly moral basics can be traced to every government in history. But a government that swings into relative morality has never worked. Without a moral foundation and without moral people to demand that we remain on that foundation, it becomes self-serving in nature and would soon become oppressive, just like every other self serving government EVER.

Liberty is not freedom to do whatever I want – Liberty is freedom from sin, from tyranny, from disorder. It’s living in justice and moral truth and demanding your government do the same.

WE HAVE THE FOUNDATION!

We simply have to stand on it. The Bill of Rights and the Constitution are solid, if perhaps imperfect. Because men are indeed imperfect. But the framers while imperfect, were tempered with a degree selfless justice and moral values. The idea that we can replace that with something that’s more self-serving so that government has no authority over us is not realistic. No one said this was easy.

The moment a gap is left in government something rushes to fill it – It’s up to us to make certain that something is good.

Tyranny is rising, the police state is reprehensible. But WE are the problem. WE keep voting for freebies. WE keep pressing for relative morality rather than the basic foundation of Godly morals that our nation was indeed framed on. WE are the problem. Our laziness, our sin, our self serving nature.

So WE can sit around the campfire saying something must be done. Saying we need to scrap it all and start over. But if you have a broken down mansion that is still structurally sound, you don’t scrap it. You get up, get to work, set it back on the foundation and fix it.

We need less government. But we don’t need to replace the foundation. We just need to start using the one we were given instead of standing around slack jawed while tyrants trample our liberty.

It’s time WE stood up, took accountability and took America back.