I Just Took a GUN into the Courthouse!

Today I carried… Wait for it… MY GUN into the County Courthouse!
YOU can do the same.

Lets talk safety. Starting with government that obeys the people! After 20 YEARS of non-compliance and the incident I had in May, not only was the required lock box installed in just 11 days, but signs have now been changed to reflect the fact that we CAN have guns in most areas of our Courthouse and that a lock box is available for the secure areas. Not only that, but every County Courthouse and most other government buildings in WA are required to follow the same rules, per RCW 9.41.300. 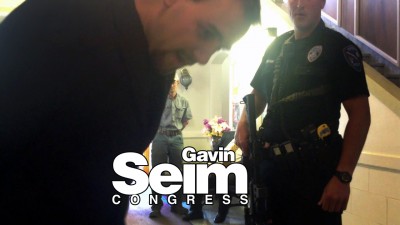 Watch the video of the May indecent that started this.

It’s a shame Grant County commissioners Cindy Carter, Richard Stevens and Carolann Swartz missed the boat. When they, Mayor Chris Jacobson, Police Chief Mike Warren and Sheriff Tom Jones were supposed to represent and uphold liberty, they were silent or opposed to it. In fact Cindy Carter told the media — “If he had come and talked to us, we could have taken care of it without the hoopla.”

That hoopla she is referring to is her employers calling out her failure to do her job and her missing the boat. Our Prosecutor Angus Lee “graciously” decided not to prosecute me for asking the law be obeyed, but stated — “In the future, Mr. Seim would be wise to avoid recording any conversation of private individuals that others may consider private without first obtaining consent, even if the conversations occur in public places.”

Wrong Cindy! You and the other representatives failed to do your job following the law and standing up for our rights. So we the people demanded that you fix it. Shall NOT Infringe means NO. It means you leave our rights alone. Representation means you stand with us and support them.

It seems to me it’s time for new representation. Commissioners who understand their job is not to rule us, but to serve and represent liberty. Constitutional sheriff’s that will stand with us. Prosecutors that will not play political theater and will deal with lawless police officers. This needs to happen all over America.

So to those who say “You’re just causing trouble Gavin!” Let me say this… You show me your results, I’ll show you mine. — This is not about lock boxes. It’s about understanding that We The People have a duty to restrain government. To bind them to the limitations of our God given liberty and demand respect from them.

This is one small victory, but it’s a glaring example of what can happen when we stand our ground. STOP writing letters America and start saying NO! STOP electing politicians to “talk it out” with tyranny. START electing representatives who REPRESENT. START standing on principle to protect the liberty of our children. —  I pray that I can do that in office, or out. And I hope you’ll join me.

It’s a shame such a big deal needs to be made just to ask a question and it would have gone so very badly if it had been someone who wasn’t so fluent and confident with the law and also chose to film the encounter.

There is no doubt that American citizens FEAR their police and that’s exactly the way law enforcement wants it.

I really hope Mr. Seim wins his bid as a representative because, clearly, he puts the interests of the American people and the Constitution ahead of the agenda of tyranny that has befallen our country and isn’t afraid to confront this cancer head on.

This is just wrong.

I’d love for Gav to file a FOIA request to obtain a copy of the 911 call in this situation. If the officers are claiming they had probable cause to invoke a search based on that phone call then either the caller(security guard) is guilty of filing a false police report by stating Gav had a gun in the call and should be dealt with criminally (or at least lose his job) or the call would prove that they, in fact, did not have probable cause to search and should be dealt with criminally.