I have not showered or shaved since Thursday morning. That’s next, but I need to get this out. PLEASE READ and share! 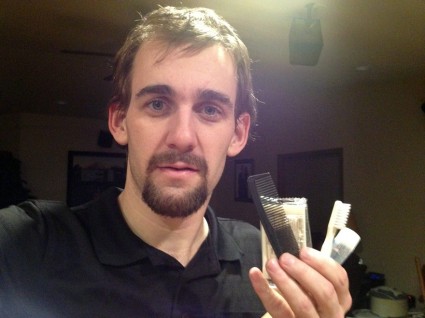 A few of the meager things we were given in the jail.

All because we were recording a trial according to our first amendment rights!

Tell Shasteen was being tried for a crime because he asked a police officer a question. So patriots showed in support up to record and make sure due process was give. For that, we were assaulted and arrested!

I’m exhausted, but glad to be with family. Thank you all for the kind words, prayers and pressure placed on officials.  They were totally hammered by your calls and that likely had a big effect on my dad Grant and I being released, as they planned to hold us longer. Rumor is they were getting so many calls they shut down the switchboard.

Videos are coming soon. We realized before the trial that they were rigging the court to make an example of Tell Shasteen. See the original article here. It seems when a public official commits a crime, they in turn charge a citizen with whatever THEY committed.

The morning dawned like no jury trial you have seen. Security was in the parking lot questioning everyone and asking if they were jurors, so they could usher them away. Police were everywhere and all hands were on deck. But on Jan 15th, a small band of patriots stood up to them and to the court like America has never seen.

It happened fast. I had run out to the car for a power cord for the camera and they sprang. When I ran back into the courtroom it was in complete chaos. Douglas county sheriff’s deputies where dragging Nathan, body slamming anyone in their path and hauling him out. — Patriots were blocking the doors as police dragged Nathan out, kidnapping him from the courtroom at special request from the judge before she even entered the chambers. He had done nothing illegal and was literally sitting quietly in a chair waiting for things to start. But they knew that he, like me, had been helping Tell, as a friend, get ready for the big day.

I rushed in and addressed Judge Judith L. McCauley, who had just entered, calling her out on what was happening. They tackled and arrested me, hauling me off. There’s more, but that will be clear in the video. Off I went to jail!

I don’t mean to whine here.  I stand for justice and there is a cost to that stand. But you need to understand how the jail system is mentally abusive and demoralizing. Not necessarily physical abuse, for it is sometimes done politely. It’s that the entire process is designed to break the spirit of all who enter. Lights are on even when sleeping, jailers come in and work in the middle of the night to break your rest. When moving you around, they leave you in tiny stone rooms for more time than necessary; just so they can gleefully remind you that THEY are in control! At great effort YOU must keep your head held high.

Everyone locked in these walls is treated as subhuman, regardless of crime or guilt. Understand that nothing about these halls had anything to do with justice. It’s a dark reflection of the tyrannical system we have allowed outside. It was quite an experience, being in there with my father and that part was a great comfort.

To give you an idea, After a night of barely any sleep, we checked out and moved from Chelan to Okanogan County. Locked in chains, we were put into the a small steel cage in the back of a van. When we arrived, now in our street clothes having checked out of Chelan, we were informed that we would be attending a hearing over video with Douglas County. They actually made us undress and get into prison clothes simply to stand in handcuffs before the judge.

I was arrested without charge, except them saying I was resisting arrest (a charge they removed from my citation) and was left in a tiny cement cell. Outside I could actually hear police on the phone with the prosecutor, talking about what they could charge me with. Shortly after I was taken, my dad was arrested and charged with multiple counts for simply not sitting in his chair. The judge had VACATED the chambers. The Sheriff himself, Harvey Gjesdal,  who actually assaulted the defendant in the courtroom, demanded that my dad sit down or be arrested. He stood up to him.

According to the courts OWN rules, it was supposed to work this way: You notify the judge that you will be filming proceedings. They cannot just refuse. They are required to respond with the conditions, or in rare cases, “why” they are disallowing filming. They have to articulate a legitimate reason to restrict. It cannot be simply because they “don’t want filming”. If you have any question on this feel free to contact the Washington State Attorney General. You can also read the court rule.

The fact is we were addressing the court on their own rules and they were in open VIOLATION of them. We had given them notices in writing that we would be filming and that Nathan and I would be there to assist the defendant. This is in no way in violation of the law. I was NEVER arguing with the judge about whether I could “represent” the defendant as news media is falsely reporting. I was addressing the judge on the illegal removal of Nathan and the fact that they were violating the law.

We we out of the picture, but Tell Shasteen handled himself incredibly as he defended himself to the jury. He had rulings and law that the prosecution was in no way prepared for. SO THEY SIMPLY REFUSED to let him speak about it and the judge readily aided the prosecutor in blocking him. They might might as well have forced the jury to convict him or skipped it all together.

The Douglas county court obstructed justice in nearly every way. All  for asking an officer a question, they rigged the court and sentenced Tell to 5 days in jail and a year probation and fines. This is like a sentence that an assault, or DUI offender would receive. JUST FOR ASKING A QUESTION. He is not in jail now however and the court violated so many of their own procedures and laws, that the entire case will likely be tossed out. Their actions match perfectly the definition of Kangaroo Court.

Douglas county is beside themselves with vengeance, but it won’t work. They have made up violations and charged me with Obstructing a Court, Disorderly Conduct, and Contempt of Court. Which are in fact only some of the crimes that THEY committed. My dad was charged with Obstructing a court, and Contempt of Court. Offenses that could (though rarely) result in over a year of prison.

This battle is the same one as the fight for our guns and our liberty. The actions of Douglas County took the court systems are in open assault on liberty. It will not stand.

Thank you all for helping, donating and standing. This is just getting started. We need all the help we can get, but liberty is worth the effort and this is going to be huge. 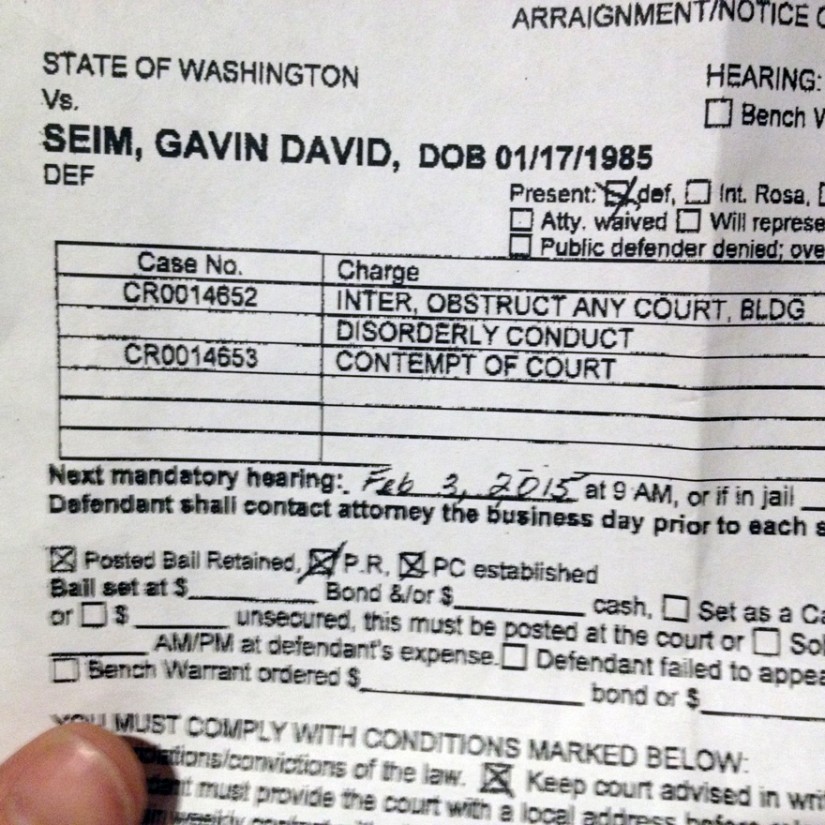