The Conviction of Grant Seim. The Killing of Liberty!

A 60 year old grandfather of 17 convicted by a jury. His crime? Standing in a chaotic courtroom! (video below).

The question is NOT when will someone stop this, it’s when will you? 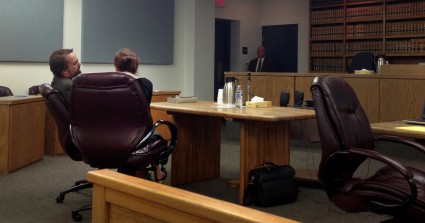 Grant Seim with his wife Sue, during a trial recess.

Grant Seim, a respected resident of Douglas County WA for many years, was found Guilty of “Disturbing the peace” AND “Disrupting a court”. Even though the judge was not in the room and the court was in recess! His sentence: Time served (1 day), $800 fines, 24 months probation.

Grant’s action? Not sitting down in an already chaotic courtroom where his two sons had just been illegally removed.

Can you disrupt a disruption? The American jury thinks so! Grant’s his case under judge Patrick McMahon kept on the straight and narrow compared to judge Judith McCauley’s trial of Tell Shasteen; that farce of justice that started this. It was notable how how much honesty was in this courtroom from the local officials. The exposure Douglas County received from our video had most of them testifying to facts. But even at that, justice was NOT served.

The SLAVE mentality thrived. The case was a joke that should have been thrown out of court. The prosecution barley even talked about Grant Seim. Rather they ranted about me (Gavin) and my brother Nathan for daring to record without their permission. For daring to challenge them. Even while using OUR VIDEO to make their points. The case was argued AGAINST ME, not Grant. It was a cause of guilt by association! Prosecutors Clem and Edgar should hang their heads in shame.

Donate for ongoing expenses in these cases.

Douglas County proved to a nation of slaves what we have become. They proved we cannot rely on justice from a jury, for the jury saw the truth for themselves as Stephen Pidgeon destroyed the States entire case. Despite their intentions, Stephen even had the States own witnesses testifying against the State. Then the jury deliberated for some time. They did not need to nullify the law, for the law was clearly not broken.

But 92% of juries convict in America; a nation with more in prison than any other. A nation who’s police kill it’s citizens with abandon. The State brings a jury in. The State gives them coffee and snacks. The State makes the comfortable in a State building run my State paid judges and the State gets the last word, telling them they must use only the States interpretation of the law.

I believe the jury knew this was a fraud. But in the end they caved to the Statists on their panel who wanted to punish another slave for daring to stand. We have built a nation of people so weak and so lazy, that going home to their beer and television is more important than standing with their neighbor for justice.

I could explain what started this. But this video from the courtroom on 01/15/15 does it much better.

The problem of We The PATRIOTS!!

The hard truth is patriots are NOT really standing up. Oh I hear big talk. People are always giving advice, always telling of a better way, though generally doing nothing for liberty themselves.

Very few joined in this unprecedented stand against tyranny. Not in the courtroom, nor in the many stands across America. Most “supporters” do NOT stand with their dollar. They do NOT show up. They do NOT put their life, fortunes or sacred honor on the line. Most are as afraid to enter the realm of tyrants as the slaves on the jury are afraid to acquit.

A handful cannot carry the full weight of tyranny! Sharing the message on your page is good. I have friends who claim liberty that did not even do that for this case. But sharing a story is NOT enough! Your guns are NOT enough! Shouting GO GAVIN is NOT enough! Cheering does NOT feed our children or support the great cost incurred by placing our heads on the chopping block.

I am not pointing a finger of anger. — I know how hard this is. I know times are tough. I know that we are under attack from all sides, that we have mouths to feed and that we are tired and have jobs. But it’s going to take a lot more than what you’re doing. It’s going to take resolve and boldness and sacrifice. Cheering from the sidelines is NOT skin in the game!

Patriots are killing liberty, because it’s being beat to death as they watch. Because they allow their children to be brainwashed by the wicked. Because they remain silent in the face of evil. Because they will not follow God. The keepers of liberty have failed to tend the garden.

The State tramples whoever they want in the court, knowing patriots will do nothing. Once they have you, the mob stands off and watched the slaves convict. It happened with Schaeffer Cox, with Kent Hovind and with many others. The Constitution, justice and liberty means nothing once we are in a courtroom. Judges have long ago sold out for power and black robes.

I will go to trial in June. While my resolve is firm, I do not expect justice. 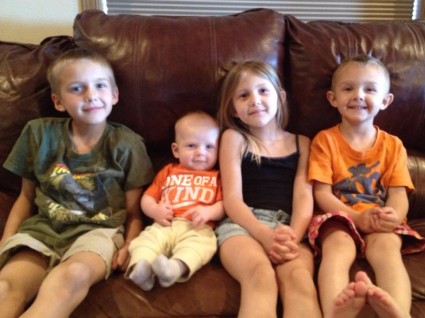 This is what I fight for. But what are we leaving them.

God help us, liberty is lost!

The slaves say “I agree with you, but NOT your methods. What they are really saying is, “I’m a coward and I am not willing to make the sacrifice for my children”.

We have allowed lies, corruption and apathy to overtake our nation. We have sent our children to halls of indoctrination. Americans believe the message of slavery, even while they say they do not.

We are already slaves. To entertainment, money, fear and tyranny. I’m not saying we stop standing. I’m saying I know no escape from this tyranny other than a return to Godliness and principle.

I seek peace. But even with force of arms there could be no restoration of liberty until the hearts and minds are awakened. — We cannot have liberty until each of us affirms that the unlawful suffering of our neighbor is as evil as if it were us; and is willing to defend it.

1 Peter 3:14: But and if ye suffer for righteousness’ sake, happy are ye: and be not afraid of their terror, neither be troubled;

Psalm 11:6: Upon the wicked he shall rain snares, fire and brimstone, and an horrible tempest: this shall be the portion of their cup.

Romans 12:14: Bless them which persecute you: bless, and curse not.