Douglas County Superior court under Judge John Hotchkiss blocked my appeal from happening. I am now under house arrest for the next 14 days and on probation for 12 months; I comply at the point of a gun! We could keep fighting in the court, but in truth we cannot afford it and that money better spent elsewhere. The courts are lost, the justice system gone! We win only when we stand on principle. When we appeal to heaven and when you humble our hearts in defiance of tyranny. —  If you cannot win on the enemy’s battlefield, then choose your own! 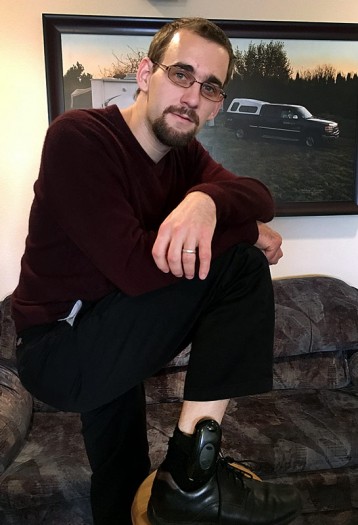 Watch my original arrest and the whole story HERE!

If Jesus was alive today… He would be fined for hosting events without a permit, arrested for eluding police, found in contempt of court for not answering questions, charged with terrorism for throwing out the money changers and crucified by an angry mob for speaking the truth about sin.

Meanwhile the church would be shaking their head in disgust saying “he just should have obeyed the law”. — That’s a man I want to emulate. What a beautiful thing we be able to suffer abuse for the sake of Christ and liberty.

Today they are accountable, they have been exposed and are now on notice. The officials of Douglas County and those who support them are complicit in criminal activity. I bear no shame. I am proud of every abuse I endure for liberty. But I am not broken today, I am humble before God and defiant before tyrants.

I’m under house arrest for 14 days. I can go to work and while the anklet is not so bad, what it symbolizes is very bad. But I am blessed, many friends like Shaffer Cox, Jeff Weinhaus and James Faire are sitting in a cages for nothing. How it makes me burn. Seek God, liberty will win and justice will come.

So what did it cost? This has taken up a year of our lives. My whole family and some of you pitched in. Defense for me and my dad, legal costs and fines to our side amounted to around $16,000. That does not count the hundreds of man hours lost, the stress endured or the many hours donated by our attorney. How much did Douglas County waste persecuting this? A lot!

Still we stand. I want to thank my Dad who was also arrested, my family and all the patriots that stood with us. I especially want to thank my wife and my attorney Stephen Pidgeon, who fought hard and gave much of his time.  Most of all I want to thank Jesus for always standing by his people. The fight for liberty is only begun; I stand on principle and I appeal to heaven. — Gav

Video of the original incident from Jan 2015 and our arrest. Read the full story here..

This is crazy I can’t believe they were letting the other guy film and not you guys! Doesn’t make sense
Thanks for standing up Gavin for all of us and for the people that may not know it yet (idiots)
Thanks again Gavin

Fascinating attempt, though crudely executed. The reality is, (We the people) are what is in question when in comes to government. Examination of who actually had rights at the foundation of our constitution helps to understand the uphill battle faced. We are currently better off than we were in the beginning. Upon separation from England and the founding of the Constitution, the rights spoke of only applies to citizens (landowners) everyone else had no rights. This changed during the civil war giving the right to vote and equal protection to all men aged 18 and over, however it was surmised at the time that control over the chattle (us) would be maintained by the writers of our resources (paychecks aka companies) these companies turned into corporations, who have all rights of citizenship (not kidding look it up), whereas we chattle have never been officially granted the rights of citizenship (though it is implied). A government (any government) is in place to protect the status quo and currently that status is corporate. Civil Rights is not just a fight of race or gender it is a fight of civilians for citizenship. We are not even a real republic we have a president who didn’t win the popular vote only the STATE vote. To stand for justice is admirable but to achieve justice and equality requires the current system to be broken. Believe it, the system is not broken, but working as it was intended.

I believe we have a long time before true Justice is given to the people but I also believe it starts with people like you to make change.. Thank You GAVIN!!